The highly speculated M-powered addition to the BMW family was revealed at the Detroit Auto Show in January 2016. Taking the spotlight for the first time, the BMW M2 Coupe packed TwinPower Turbo performance and intelligent connectivity in the signature BMW Motorsport design.

The Inspiration Behind the BMW M2

To say that the M2 is an upgrade from the former M1 model is an understatement. The compact sports coupe traced its roots back four decades to the notorious BMW 2002 turbo which first captured the attention of the world at the 1973 Frankfurt Motor Show.

Nevertheless, the BMW 2002 was not the only inspiration behind the new M model. The legendary, first-generation BMW E30 M3 and the renowned racing sensation BMW 3.0 CSL paved the road of engineer and design inspiration for the new BMW M2.

The BMW M2’s impressive power output is much like an extensively tuned-up version of the M235i. Rated 365 BHP at 6,500 RPM, the maximum rev of 7,000 RPM can be achieved. The engine’s peak torque is measured at 343 lb-ft which can be further elevated to 369 lb-ft with the overboost function. This makes the new BMW M2 pack more torque than the outgoing BMW M3 E90/E92/E93 models.

Fitted with the standard 6-Speed Manual Transmission, the M2 goes from 0 to 60 mph in 4.4 seconds.  While equipped with the M Double-Clutch Transmission (M DCT, as a Performance Option), the M2 accomplishes the 0 to 60 mph dash in just 4.2 seconds. The 3.0-liter, inline 6-cylinder engine’s top speed is measured at 155 mph for the US production version. What gives the exceptional power to the all-aluminum engine unit was its rigid close-decked design and thermodynamically optimized properties. With the cylinder water jacket sealed at the top, higher cylinder pressure is developed, and in turn, more power was produced.

The design of the M2 engine is especially sought out to combine elected performance components from the 2014 models BMW M4 and M3. These components include the crankshaft main bearing shells, the optimized piston top ring, and the grey-cast iron liners. Also, high-performance spark plugs are specially designed to endure the higher temperatures of the engine.

The BMW engineers designed the M2 with performance optimization in mind. The turbocharger, for instance, is incorporated into the exhaust manifold. The result is a shorter warm-up time for the engine and less emission.

Furthermore, a modified oil supply system is in place to limit movement of the oil during sudden acceleration or brake. The arrangement ensures consistent oil supply to the engine under any driving situation.

The Outstanding BMW Energy Efficiency in the M2

In addition to the Auto Start/Stop function, and Brake Energy Regeneration, fuel saving from the ancillary components further reduces energy consumption in the BMW M2. The coolant pump, for example, saved energy by being active only during required operations.

The air conditioning compressor turns off when non-operative, and the oil pump is engineered to be map-controlled. The Electric Power Steering Integrates M specified Servotronic function and electronically controls the level of steering assistance according to vehicle speed. It can be adjusted easily with the Driving Dynamic Control.

The Electric Power Steering in the M2 does not need electricity during a straight-ahead driving which contributes to energy saving. These fuel-efficient functions greatly reduce the vehicles’ emission and energy consumption. The Standard equipment gearbox designed for the new BMW M2 is the light and compact 6-Speed Manual Transmission with automatic rev-matching. Racing fanatics can appreciate the smooth shift operation derived from the well-balanced supply of dry-sump lubrication throughout the entire system. In addition, the engagement speed control function further ensures a steadier drive.

Synchronizing two drive-trains with its individual clutch controlled by an integrated hydraulic module, the configuration can detect and engage the next gear shift according to the engine’s drive mode and the level of acceleration. The outcome is an uninterrupted power flow through seamless gear change within milliseconds.

Shifting can be done automatically or manually with the M gearshift lever located on the center console or with the M steering wheel shift paddles. The BMW M2 inherited the lightweight Forged Aluminum Axle System from the latest generation of BMW M3 and M4. The Double-Joint Spring Strut with the four-piston fixed calipers front axle and the two-piston fixed caliper rear axle significantly reduced unsprung mass in the M2. Axles are painted in the signature M Compound Brakes metallic blue and etched with the symbolic M logo.

The perforated brake disc rings with inner-vents are constructed with grey-cast iron. Front and rear axles are respectively fitted with a large 15-inch and 14.5-inch rotor. Under the strenuous wears and tears of track runs, the M Compound Brakes are proven to be fade resistant and high-heat tolerant. In turn, deceleration, braking, and driving dynamics are greatly improved.

The Uncompromised M Performance Dynamics in the BMW M2

The Dynamic Stability Control (DSC) optimizes stability in the BMW M2 by sensor controlling the chassis to prevent and correct oversteering or understeering.

The M Dynamic Mode, on the other hand, can delay the DSC intervention by taking the training wheels off the DSC-baby-sitting and allowing a greater degree of wheel slip.

The Active M Differential provides directional and traction stability by applying different degrees of locking effects (between 0 to 100) to wheels to prevent traction loss. The M2 is perfectly made for laps on the track or simply for the daily ride. 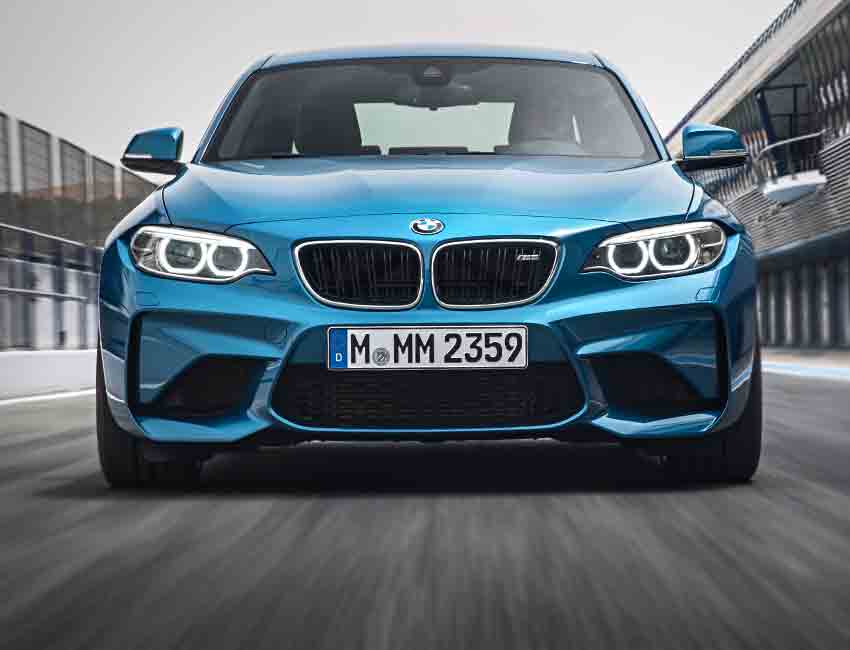 The “optimized” exhaust sound in the BMW M2 has been a controversial topic. The amped sound is produced by a special electronically controlled flap system. Through the Driving Dynamic Control function, drivers can choose a desirable “composed” exhaust sound to go with a driving mode.

If you have a thing for high-revving cars and their roaring exhaust, the M2 can certainly satisfy your ears.

Overall a well done! The BMW M2 Coupe is certainly a versatile M power in a smaller package.