After three decades and five generations of transformation, innovation, and refinement, the iconic BMW M3 continues to sophisticate in all aspects. It held its reputation high as one of the most sought-after performance vehicles in its class.

During the 2014 International Auto Show in Detroit, Michigan, the highly anticipated M3 Sedan took the stage alongside its new variance – the M4 Coupe.

Boasting many similarities to today’s BMW M4 Coupe, the BMW M3  is considered the ancestor and inspiration for the new rising-star coupe. Today, the 4-door sedan became the official body type for the latest BMW M3 model, and the prior generation M3 Coupe was made over into the new 425 HP and 405 lb-ft torque F82 M4.

For the past 30 years, this German-engineered supercar never ceased to revolutionize its pioneering development. So, let us turn the pages back and unfold where the evolution had all begun.

A Brief History of the BMW M3

In 1985, Munich, Germany, at the headquarter of the BMW Motorsport GmbH, the company’s then managing director Paul Rosche came up with the idea of the BMW M3. Production began swiftly after, and the 17,970 units completed and sold were all originated from the BMW plant right next door.

This was the very first generation of the BMW M3, and it marked the beginning of a sports car legend. In the following years, there were a total of 222,293 combined production units accounted for the second, third, and fourth generations since 1992.

Dr. Friedrich Nitschke, President BMW M GmbH, reminisced at the debut of the New BMW M3 and M4 in 2013:

“The BMW M3 has been our iconic model in the high-performance sports car segment since 1985, when the company unveiled the first generation of the BMW M3 at the International Motor Show (IAA) in Frankfurt. Today, 28 years later, the new BMW M3 Sedan and new BMW M4 Coupe are set to extend this tradition into a fifth generation and take the car’s unique combination of outstanding dynamics and unrestricted everyday usability to yet another new level.” The manufacture of the first M3 began at its Munich plant. Now at almost 30 years later, the BMW M4 returned to the birthplace to commence its official production. The M3 production, on the other hand, was hosted at the Regensburg Plant where the second through the fourth generations of the M3 was produced.

BMW explained that the reason and significance of separating production facility was to focus the effort on “the company’s commitment to integrating the two high-performance sports cars into the production processes for their respective donor models”, hence the 3 Series and 4 Series.

“The ‘mixed’ production,” addressed by BMW, “can respond quickly to market fluctuations by making adjustments to unit figures as required. As well as efficient production planning and logistics, the essential ingredient in this approach is the single-line system: both M models will be built alongside their respective donor models on the same production line.” 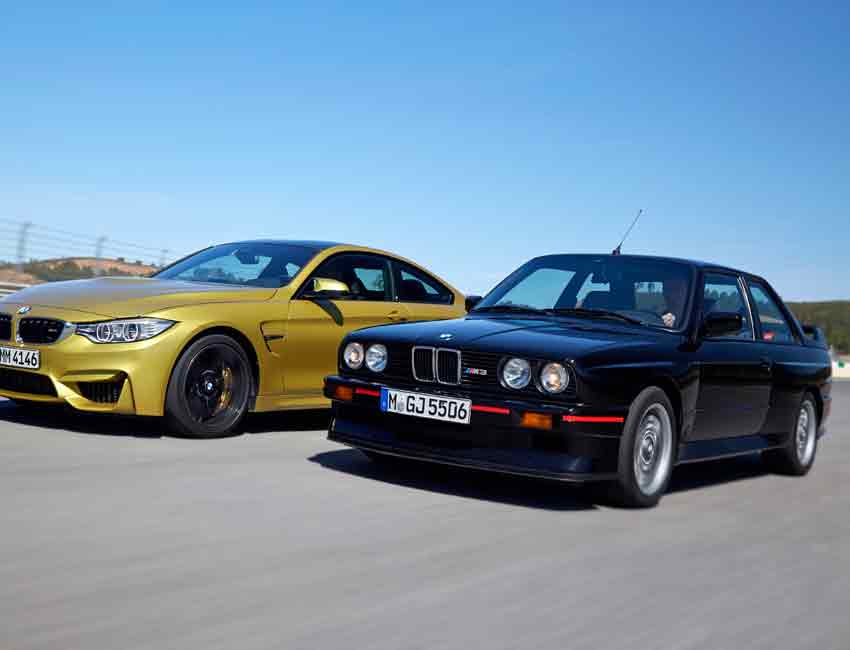 The very first BMW M3 model made its initial appearance in the 1985 Frankfurt Motor Show in Germany.

The 200 HP rear-wheel drive was initially built for track purpose only. In order to comply with the touring car competition Group A sporting regulations, 5,000 units of the street-legal version required for homologation had to be built for sale each year.

The European street version of the first-generation BMW M3 E30 officially began production in the spring of 1986. The car quickly became the iconic racing sensation as it rivaled its competitions and snatched several Touring Car Championships in Europe.

As the new flagship gained popularity and recognition all around the world, the BMW M3 E30 North American version production took place in 1987, and in 1988 its official release was announced.  By the time production of the first generation had ended during 1991, worldwide sales of the road-going Coupe was a total of 17,970 units sold. Like the M3 E30, the second generation of the BMW M3 E36 was boasted in distinctive cosmetic and power upgrades from its 3 Series engineered designs.

Different from the E30, the M3 E36 was built specifically for the everyday road. The production model came in three body types. The 2-door coupe and convertible in 1992 as well as the 4-door sedan in 1994. It was the very first time that the M3 model brought on a 4-door sedan.

By this time, 71,242 units of the M3 Coupe, Convertible, and Sedan combined were produced in Regensburg. The BMW M3 E36 3.0 had a total of eight production versions. Of which three versions were standard production that included the European sedan and convertible models, and the remaining three were limited editions made for the European and United States market.

In addition, there were two more special built editions with only a handful of samples that were not at all commonly distributed in the market.

The BMW M3 E36 3.2, on the other hand, did not have any official variations in special production versions. However, exclusive special orders were requested from the United Kingdom and Australia markets in limited numbers. In 1999, returned to the Frankfurt Motor Show, the new high-performance concept BMW M3 E46 made its compelling entrance to the public. In 2000, the European M3 E46 production model was completed and showcased at Geneva Motor Show.

The improvements made to the M3 E46 were pleasantly sophisticated, to say the least. There were a number of aesthetic and functionality modifications such as the following:

Furthermore, one of the most distinctive upgrades that brought out the BMW M3 performance characteristics was the signature bulging power dome on the bonnet (hood) of the car.

More impressive enhancements were made in regards to the power upgrades. In the third generation M3, there were three important additions to the E46 as listed below.

The 3 Most Important Additions to the BMW M3 E46 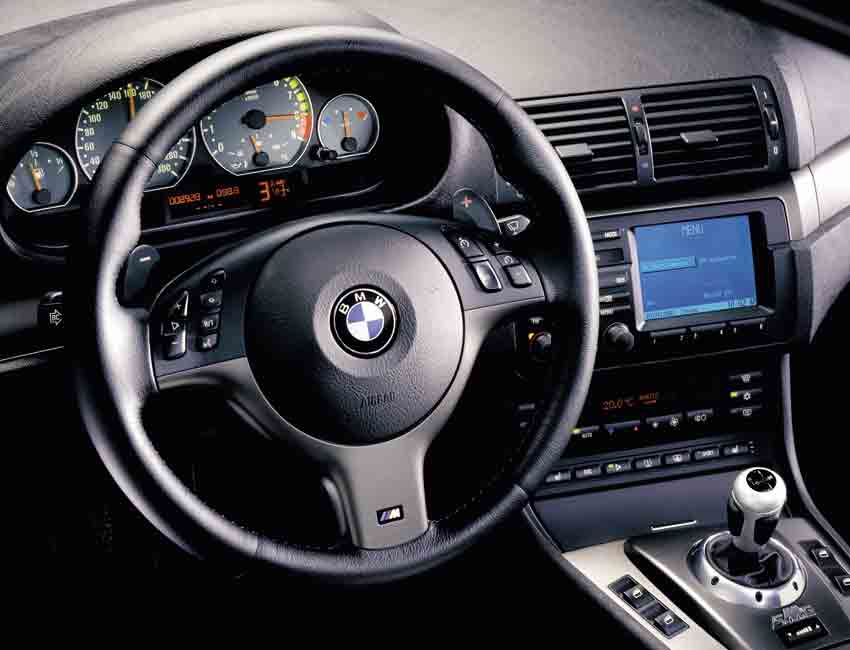 SMG II was the improved version of the M3 E36’s Sequential Manual Gearbox (SMG). It was the concept of having an electrohydraulic clutch system controlled and operated by an electronic gearbox referred to as the BMW DriveLogic.

SMG II provided 11 changeable options in gear shift, of which six of those were “sequential” or manual mode and the remaining five were in “automated” or automatic shift mode.

Launch Control was also part of the system which optimized the acceleration. In addition, SMG also allowed the driver to change gears using paddle shifters located on the steering wheel.

The special DSC was designed to electronically control the suspension of the car, maintain maximum traction of wheels, and to keep the optimal stability of the drive. DSC can automatically calibrate to make minor adjustments to the car during oversteering or understeering. DSC can also apply brake forces to individual wheels when needed to keep the car in its course.

For this generation of M3s, the M Differential Lock located on the rear axle allowed a wide range of 0 to 100 percent lock.  It came as standard equipment on every M3 E46. Its main function was to further control stability of the car in addition to providing superior tractions. This also ensured that the rear-wheel-drive carried out its utmost performance standards and retained its highest stability controls even on undesirable road conditions. Then there was the special edition called the M3 E46 CSL (Coupe Sport Lightweight). This model was built for the European market only and was composed of several specialized lightweight components such as Carbon-Fiber-Reinforced-Plastic. In 2007, came the fourth generations of the BMW M3. Compared to its predecessors, the word “upgrade” does it no justice.

Everything about this generation was greater, better, faster and more efficient – starting with the aggressively customized V-8 engine and all its unconstrained 414 horsepower. The transformation was completed with a total rework of the exterior body style as well as the restyling of the interior.

It was not until October 2007, the M3 E92 Coupe was shown to the public at the Tokyo Motor Show in Japan, and soon to follow was the debut of the E90 sedan. The E93 convertible premiered a year later in the Geneva International Motor Show.

In addition, there were 5 notable innovations that made the M3 E90, E92 and E93 unique during the 7 years they were in production.

1. The First of the BMW M Double Clutch Transmission or DCT

The 7-Speed Dual Clutch Transmission was first launched in the M3 E90/E92/E93. It was a compact design of the two gearboxes combined in one housing. The gearboxes were meant to work interchangeably in order to eliminate interruption during gear change and ensure smooth power flow.

The S65 B40 was a lighter but more powerful engine that operated on a Double VANOS Variable Valve timing system in the M3 E90/E92/E93.

The automatic engine start/stop function stopped the engine when the car was at a complete halt in order to lower fuel consumption and CO2 emission.

4. The Addition of the POWER Button

The POWER button was located on the Center Console. By pressing this button on the M3 E90/E92/E93, throttle response and acceleration sensitivity would increase as the pedal became more sensitive.

The ZCP Competition Package is exclusively available in the 2010 and Later M3 E90 Sedan, as well as in the M3 E92 Coupe.

The ZCP Competition Package Include the following: There were Three official versions for each of the fourth generations of BMW M3: E90 Sedan, E92 Coupe, and E93 Convertible.  All three variations in the European specification received both Left-Hand Drive (LHD) and Right-Hand Drive (RHD) models. The North American market had the Left-Hand Drive version available only.

There were two limited-edition M3 models constructed with major mechanical upgrades for the European market. They were the supercharged M3 E90 CRT (Carbon Racing Technology) Sedan and the faster and lighter M3 E92 M3 GTS in fiery orange body paint. Both models delivered an astounding 450 horsepower.

There were 25 more special editions were made in that particular era, and five of those were officially released by BMW M. The remaining 20 were custom orders fulfilled by BMW Individuals and sold in specific markets. In 2013, the M3 went back to the lab and came out with another thorough revamp. The latest M3 F80 Sedan yet again surpassed our expectations in both the looks and the driving experience as BMW pushed its limits in performance and balance.

In 2016, BMW brought on a high-powered release to the US market for the first time – the highly anticipated BMW M4 GTS.

We look forward to the next amazing BMW.